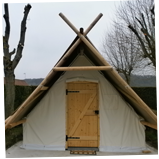 Originally, the prospector tent was used by the Indians prospector mountain dwellers  from the American lands and then it has been used by the gold diggers.
New trend in the outdoors tourism, and a true way of life, this unusual accommodation brings back together nature, confort and the authenticity.
After some modifications, the prospector tent has became an ideal accommodation for a weekend with your family or with your beloved one, or even for a longer stay to enjoy everything. Very liveable, it allows the stay of 7 people for every seasons. 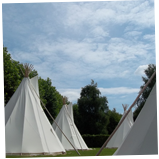 They come from the Amerindian plains, they offer a great living space and confortable favouring communication and exchange. The teepees are composed of poles disposed in cone, an exterior canva and an interior canva which creates a ventilation allowing to make a fire in a mexican heater : the Brasero. Its height allows a great fresh and moving air.

A little bit of history…

Native American tribes from the Canada
When Europeans began to explore North America in the sixteenth century, hundreds of Native American tribes were occupying the territory.
These people were called « Indians » by ignorance, because it is Spaniards who gave the name of Native Indians (Spanish: Indios). Christopher Columbus was named so because it had failed to properly assess the actual size of the globe.
British & later Americans resumed the term « Indians by adding the pre-fixed » Red « (Red Indians, Redskins in French) who oppose Pale Face (French: palefaces).
Today it uses the French terms « Native » or « Aboriginal ».

Later, Americans wanted to conquer the entire continent. « Hunting for the Indians » will become a national sport!
It is often difficult to navigate in the names of Indian tribes.
Western historians often use a friendly name that stakeholders do not use themselves.